Presiding Deans for the South-East Area

Following the retirement of Bishop Patrick Lynch in December 2020, Archbishop John Wilson appointed Fr Victor Darlington and Fr Marcus Holden to act as presiding Deans for the South-East Pastoral Area of the Diocese in which they reside.

This arrangement is for the period until the appointment of a new Auxiliary Bishop. 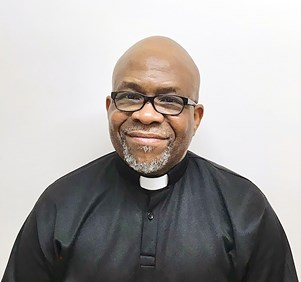 He had his Seminary formation at SS. Peter and Paul Seminary, Bodija, Ibadan and he was ordained a Priest on September 8th, 1990.

He has been a part-time lecturer at St. John’s Seminary Wonersh since 2008 and, he also lectures at the Diaconate Formation Programme for England and Wales.

Fr Victor is the Episcopal Vicar of the Commission for Promoting Racial and Cultural Inclusion of the Archdiocese. He is also the Dean of Camberwell Deanery. He and Fr Marcus Holden are presently overseeing the Southeast Pastoral Area of the Archdiocese which comprises the Deaneries of Bexley, Bromley, Camberwell, Greenwich, Lambeth, and Lewisham.

Fr Marcus was born in Chorley, Lancashire, but also spent ten years of childhood in Wales. He read Theology at Oxford University, before heading to Rome in 1999 (Venerable English College and the Pontifical Gregorian University) for preparation and studies for the priesthood. His home base at that time was New Malden and he was ordained there in the parish of St Joseph on 10 September 2005.

Fr Marcus was appointed by Archbishop John Wilson to be Episcopal Vicar for Evangelisation and Catechesis in February 2020. He is the co-founder of the Evangelium Project and also works with the Maryvale Institute and the Catholic Truth Society.

Alongside Fr Victor Darlington, he shares currently and provisionally (until a new auxiliary bishop is appointed) a responsibility for the South-East pastoral area of the Diocese.

The South East Area of Southwark comprises the deaneries of