In 1858 the French fortress town of Lourdes, situated on the Gave de Pau River at the foot of the Hautes-Pyrénées was home to around 4,000 inhabitants. This relatively poor area was home to Soubirous family, who had fallen on such hard times that they were living in one room, known as the 'Cachot' or former gaol of the town. The eldest daughter of the family was Marie-Bernarde, whom we now know as Saint Bernadette. She was just 14 years old when the Blessed Virgin Mary appeared to her at the Maissabelle Grotto whilst collecting firewood

The Grotto within Lourdes Sanctuary, where St Bernadette uncovered the spring of water

On 11th February 1858, Bernadette heard a sound like a 'gust of wind', followed by a bright light and vision of a beautiful lady.  Sensibly she asked her companions whether they had seen the same, but they had not. This was to be the first of eighteen visions that would follow during that year.

During the thirteenth vision on 2 March, the Lady requested that a chapel should be built there so that people could come in procession to do prayer and penance and to wash in the waters: a fact she relayed to her priest, Father Peyramale. Meanwhile, the French newspapers and the crowds accompanying Bernadette to the grotto swelled to many thousands and it was decided that Bernadette and her family needed to be both moved and protected.

On 25th March, the lady told Bernadette to drink and wash in the water of the spring that flowed under the rock where she was standing and eat the herb that grew there. Bernadette dug the ground since no stream was apparent and there was no initial sight of the spring.  However, two days later, the water started to flow and Bernadette both drank and washed in it since, to the surprise of the townspeople, it was completely clear.  Although thorough testing has since found nothing remarkable about the water except for a high mineral content, it was deemed to have healing properties.  Bernadette maintained throughout her life that the water could only heal through faith and prayer and this is reflected in the sanctuary that has emerged in contemporary times, where the spiritual and physical care for assisted pilgrims is seen as being of paramount importance. 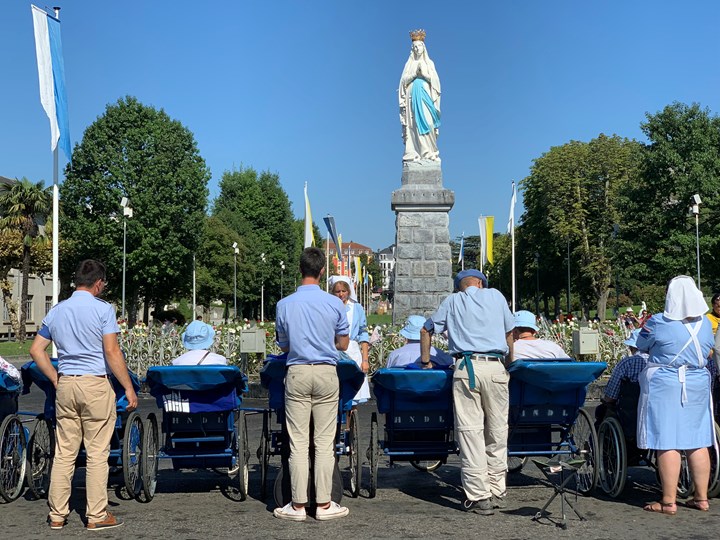 Mary also revealed her identity to Bernadette during the penultimate apparition on 25th March 1858, the Feast of the Annunciation of the Virgin Mary, with the words Que soy era Immaculada Conceptiou,” which means, “I am the Immaculate Conception.”

The doctrine of the Immaculate Conception had been proclaimed relatively recently in 1854 and although clergy would have been familiar with the teaching, it was believed that a girl who could neither read or write, and who had failed her catechism exam, could not known about it, let alone understood it,  Furthermore, it was felt that it would not have been discussed amongst people of Bernadette’s low station and educational status. In this way, and by her calm and devout nature, the miraculous nature of the apparitions was approved in 1862.

Bernadette saw her last apparition on July 16th, the feast of Our Lady of Mount Carmel and later entered into religious life with the Sisters of Charity at Nevers. Having suffered with physical ailments for most of her life, the health of this unique visionary gradually failed and she died on 16th April in 1879 at the age of thirty-five.  Her body was exhumed in 1909, and later in 1925, and found to be incorrupt.

St Bernadette was canonized in 1933, not for being a visionary and for receiving the apparitions, but for the way in which she responded to that special grace.

Over 7,000 miraculous recoveries have been attributed to the intercession of Our Lady of Lourdes, but only 70 cases have been officially recognized by the Catholic Church. Lourdes remains a popular destination for Marian pilgrimage. The city has the second-largest number of hotels in France after Paris, ordinarily welcoming around 5-6 million pilgrims each year, who come in prayer, penance and procession. 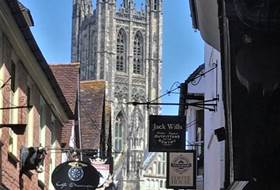 The Archdiocese of Southwark is blessed with many commissions carrying out a variety of work, from Education to Ecumenism and Safeguarding to Spirituality. They all play an active role in the life of our Catholic community.

Agency for Evangelisation and Catechesis

The Christian Unity Commission for the Roman Catholic Archdiocese of Southwark has been in existence for over forty years. Our main task is to encourage Catholics within the Archdiocese to work and pray for Christian unity.
Continue Reading

Do you share our vision of a world in which people live in peace and harmony with one another and with nature, where our common humanity is respected and all can contribute freely to the common good?
Continue Reading

The diocesan Liturgy Commission has a responsibility to the Archbishop for the promotion of the liturgy and other acts of public worship. Its work encompasses the buildings in which we worship, the music with which we praise God and training for those involved in the liturgy in different ways.
Continue Reading

The Southwark Marriage and Family Life (MFL) team is responsible for initiating, fostering and supporting activities in the diocese that will enable married couples more fully to live out their sacrament of matrimony by enriching their relationships.
Continue Reading

Although it has not been possible to undertake any pilgrimages until very recently, due to the COVID-19 Pandemic, it is ordinarily a regular part of Catholic life. The Christian life is a journey towards God, and in this simple act of outward physical travel, whether on foot or by aeroplane, we inwardly seek to draw closer to Christ by putting time aside to consider our relationship with the Lord, and ask where he is leading us.
Continue Reading

Welcome to Safeguarding within the Archdiocese of Southwark.
Continue Reading