Monsignor Ewing is a Vicar General and the Moderator of the Curia for the Archdiocese of Southwark.

Monsignor Ewing exercises his role on a full-time basis.

He acts on behalf of the Archbishop, and with his authority, guides canonical and administrative processes within Southwark.  In doing so the Vicar General assists the Archbishop in developing pastoral life and mission of the Archdiocese alongside effective management.  He regularly attend meetings of the Archbishop’s Council, which steers key decisions relating to all diocesan matters.

As Moderator of the Curia he coordinates the exercise of the administrative duties and oversees the office holders, or curia, in the Diocese.

Born in London in and educated at St Mary’s Primary School, Wimbledon and Richard Challoner Secondary School in New Malden, Surrey, Mgr Ewing commenced study for the Roman Catholic Priesthood at St John’s Seminary, Wonersh in 1973 and was ordained priest for the Archdiocese of Southwark in 1981.

Monsignor Ewing will bring a wide range of experience to his new roles, having worked previously on ecumenical projects, as a Sixth Form college chaplain and as a Parish Priest at Wandsworth West and Balham.  Both appointments as Parish Priest included roles as Hospital Chaplain, Primary and Secondary School Chaplain as well as membership of School Governing Bodies in the Primary, Secondary and Sixth Form sectors.

In 2007 Monsignor  Ewing became a Member of the Canon Law Society of Great Britain and Ireland, a membership which he continues to hold today.

in 2009 he became the Director of the Association of Catholic Chaplains in Education (ACCE) at the same time as being Director for the Ongoing Formation of Priests in the Archdiocese of Southwark. In the same year he was appointed as Papal Chaplain with the title of Monsignor by Pope Benedict XVI.

Mgr Ewing was elected as Dean of Wandsworth 2013, a role which he held before moving to St John’s Seminary in Wonersh in 2017 to take up the role of Vice-Rector. He was later appointed as Rector in 2020, following the tenure of Canon Brian Coyle.

In his spare time he enjoys the theatre, eating out, travel, interior design and DIY.

I am very pleased to be able to assist the Archbishop and the Diocese as a Vicar General and Moderator of the Curia.

I know that many meetings and much paperwork will come my way in these roles – they already have!  However, hopefully what will keep me grounded and focused in my work with the Diocesan Curia and Central Services is the reality that at the centre of every meeting and every document are the people of the Diocese …  its clergy, religious and parishioners - with whom, of course, I look forward to having much personal contact.

I was born in the Diocese, and I have been privileged to serve it as a priest for over 40 years. I have a great love for Southwark – which will be the foundation for my new roles - in which, of course, I ask for your support and your prayers. 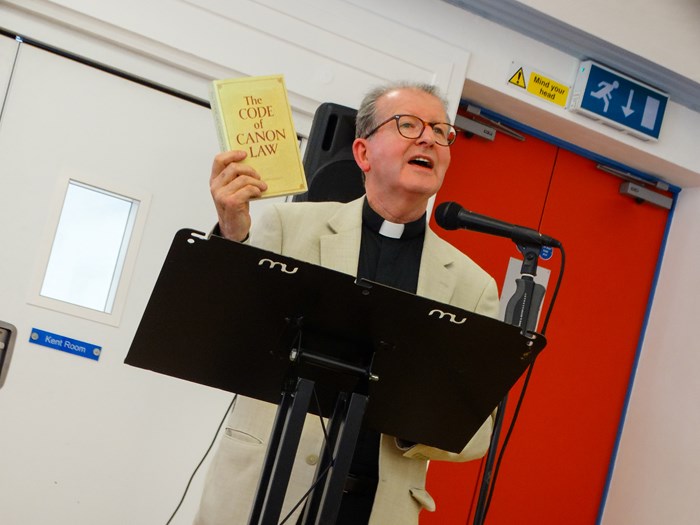 The Diocesan Archive holds the episcopal and administrative records of the Archdiocese of Southwark from its foundation in 1850 to the present day.
Continue Reading

Clergy are of great importance to Southwark, from the beginning of their ecclesiastical formation and ordination to their retirement and ministry beyond active parish life.
Continue Reading

The Archdiocese of Southwark is a charitable incorporated organisation, or CIO.
Continue Reading

The Trustees of the Archdiocese share responsibility for governing Southwark, thereby directing how it is managed and run as a charity.
Continue Reading

The effective administration of the Archdiocese of Southwark is key to underpinning all pastoral activity, ensuring parishes and schools are run within a legal and safe framework.
Continue Reading

The Church is called to be the Mystical Body of Christ on earth, a pilgrim people with no abiding city (cf Sacrosanctum Concilium 2,7).
Continue Reading