The Archdiocesan Shrine to St Oscar Romero is a large colourful reliquary cross, decorated in the style of art from South America.

It holds relics belonging to Saint Oscar Romero, the Patron Saint of Christian Communicators, namely his skull-cap (zuchetto) and a piece of the vestment that he was wearing whilst his was assassinated in 1980 whilst saying Mass in San Salvador. 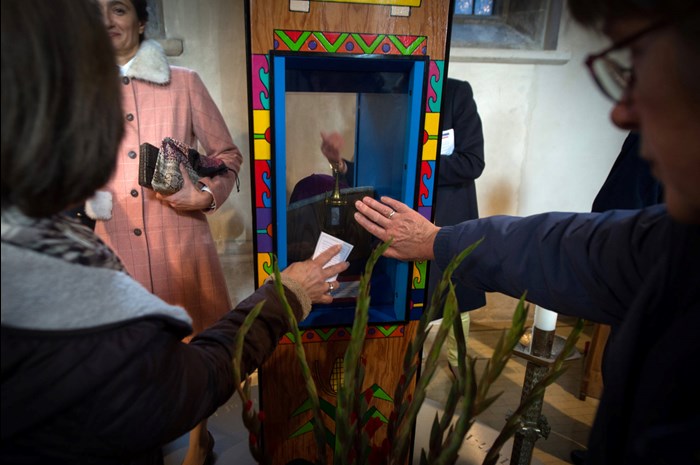 Oscar Romero y Galdámez was born on 15th August 1917 to Santos Romero, who worked in the local telegraph office, and Guadalupe de Jesús Galdámeza. He showed early signs of seeking a religious life, entering into junior seminary aged 14 and going on to study in Rome.

He was ordained in 1942, having waited a year for his ordination as he was a year below the required age of 25. As a priest he visited prisons in the area, and worked alongside others in the Church to provide food and pastoral support for the poor. He assisted with the construction of San Miguel's cathedral and was later appointed rector of the inter-diocesan seminary in San Salvador.

In 1966, he was chosen to be Secretary of the Bishops Conference for El Salvador. He also became the Director of the Archdiocesan 'Orientación' newspaper.  Notably, he supported devotion to Our Lady of Peace and also become renowned for his impactful sermons. On 21st June in 1970 was ordained as a Bishop.

A man of justice, he protested to the President in 1974 when the army killed three poor people in his Diocese simply for standing up for their rights. This act was to be a foretaste of the challenging times to come.

Romero was appointed and installed as the Fourth Archbishop of San Salvador in 1977.  As Archbishop he spoke passionately against injustice, corruption, poverty, torture and assassination, being greatly affected by the murder of a close priest friend, Fr Rutilio Grande, who worked extensively to empower and assist the poor.  In 1979, the revolutionary government Junta came to power, and with it a notable surge in human rights abuses. The increasingly violent behaviour would develop into the Salvadoran Civil War.

Romero endeavoured to obtain Vatican condemnation of the right-wing El Salvador regime for violations of human rights, expressing to Pope Saint John Paul II that it was

'difficult to support the government in Salvador because it legitimized terror and assassinations’.

He often used his radio broadcasts to list the names of those that had disappeared, been tortured or murdered and his diocesan newspaper offered the same information to its readership.

His outspoken behaviour and actions won much admiration across the world but also many enemies in the right-wing political leadership of the country. Each Sunday he would broadcast a sermon on the radio, with the transmission gained a significant following across the country. The radio station was attacked and even bombed on a number of occasions, but each time it was rebuilt it with the help of CAFOD. On 23rd March 1980, he preached a sermon in which he called on Salvadoran soldiers, as Christians, to

'obey God's higher order and to stop carrying out the government's repression and violations of basic human rights'.

Romero was murdered the next day on March 24th 1980, whilst he was celebrating Mass in the chapel of the Divine Providence Cancer Hospital in San Salvador. The gunman has never been identified, but the State later acknowledged their fault and responsibility.

Romero's funeral took place on 30th March 1980 with over 250,000 mourners present from all over the world. His body is buried in the Metropolitan Cathedral of San Salvador.

On 23rd May 2015, Archbishop Oscar Romero was beatified in the Plaza El Salvador de Mundo, The service was presided over by Cardinal Angelo Arnato S.D.B. on behalf of Pope Francis. The newly ‘Blessed’ was granted patronage of Christian Communicators by the Universal Church. Arnato spoke of him as ‘beloved, peacemaking man of God’, whilst Pope Francis since stated that Romero's voice was one that 'continued to resonate'.

The Romero Cross, which is situated in St George's Cathedral between chapels dedicated to St Joseph and St Patrick, was commissioned by The Archbishop Romero Trust in conjunction with the Cathedral. It houses a reliquary containing Archbishop Romero's zuchetto (skull-cap) and a piece of the alb that he was wearing when he was martyred on 24th March 1980. 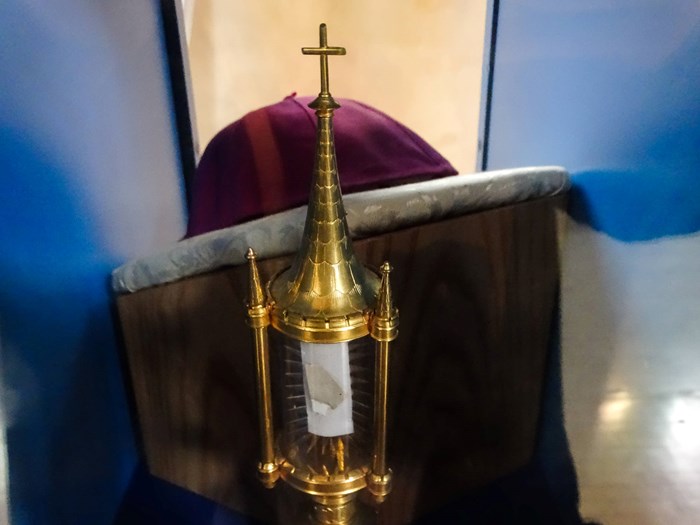 The striking and colourful reliquary cross was blessed on 19th September 2013 by Archbishop Peter Smith and dedicated to the late Bishop Michael Evans, former Bishop of East Anglia and Southwark Priest who died of cancer in 2011, but held Romero in great esteem. 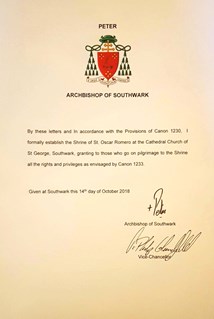 On 6th March 2018, Pope Francis approved a miracle attributed to Romero, allowing the final step towards canonisation, which was celebrated in Rome's Saint Peter's Square, Rome, on 14 October 2018. On this date Archbishop Peter Smith signed a decree stating that the space dedicated to the Romero Cross in St George’s Cathedral was now the official Diocesan Shrine of St Oscar Romero in Southwark, granting special rights and privileges to pilgrim visitors.

A National Mass to celebrate Romero’s Canonisation took place on 3rd November 2018 at which Archbishop Peter Smith was the Principal Celebrant in the company of many Bishops and senior clergy from England and Wales.

In order to mark the Canonisation, the Romero Trust offered an A3 portrait poster of Saint Oscar Romero to all parishes and schools in Southwark. 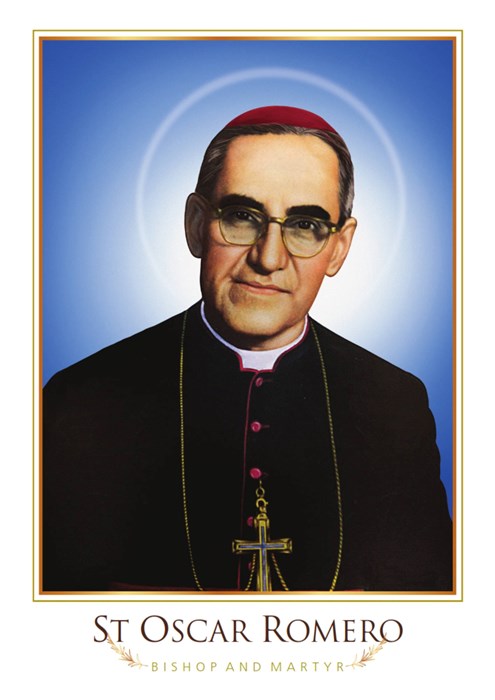 On Saturday 23 March at 12.30 pm a Mass and Blessing of the Diocesan Romero Shrine, with its new Shrine Gates, took place in St George’s Cathedral, Southwark, in conjunction with the Romero Trust. Archbishop Peter Smith presided at the service. The gates are unique in design, with the railing element taking the shape of the sword of St George. 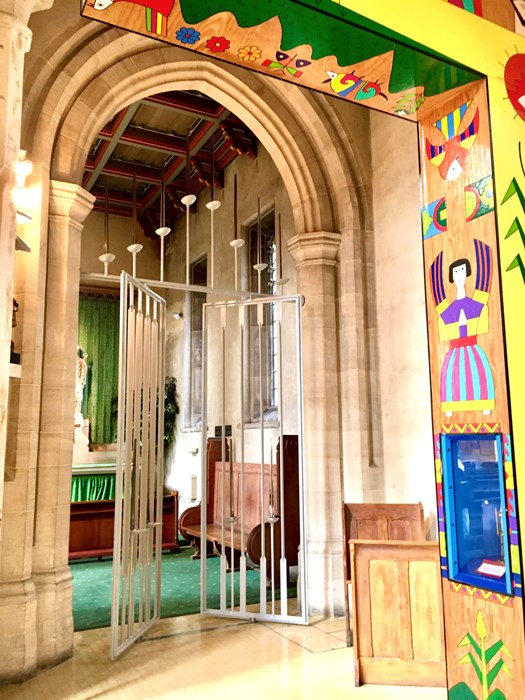 Shrine Mission and Appointment of Guardians

In December 2019 Archbishop John Wilson approved Statutes for the Shrine Romero in accordance with Canon Law.  This official Diocesan Shrine now has a clear and explicit mission and purpose as a powerful presence of courageous sanctity, inspiring all to become ever more authentic disciples of Jesus Christ.   In following St Oscar Romero, the mission of the Shrine is a dynamic focus in the Diocese for a prayerful spirituality which embraces an active commitment to the poor and disadvantaged. 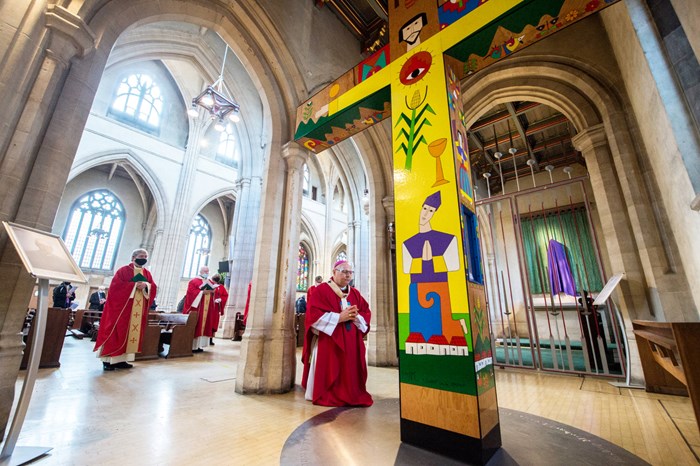 The Rector of the Shrine is the Dean of St George’s Cathedral, who manages the Shrine as an integral part of Cathedral life. Additionally, Archbishop Wilson has appointed four Guardians of the Shrine to assist the Rector in fostering devotion to St Oscar Romero and promoting the mission of the Shrine. They are

Prior to the approval of the Statutes, the Archbishop Romero Trust transferred ownership of the relics to the Diocese. The Shrine of St Oscar Romero is therefore the sole property of the Archdiocese of Southwark.

The Romero Trust and St George’s Cathedral continue to mark the birthday of Saint Oscar Romero with a celebration Mass each year in March, with the exception of his 103rd birthday in 2020 due to the national COVID-19 pandemic.

To read more about the life and teachings of Archbishop Oscar Romero, please access the Romero Trust website:  http://www.romerotrust.org.uk

National Mass of Thanksgiving for Canonisation