The parish of St Francis de Sales at Hartley in Kent, which is one of only a few thatched churches in the UK, is hosting a pilgrimage to Our Lady of Hartley at 3.30 pm on Saturday 7th May 2022. 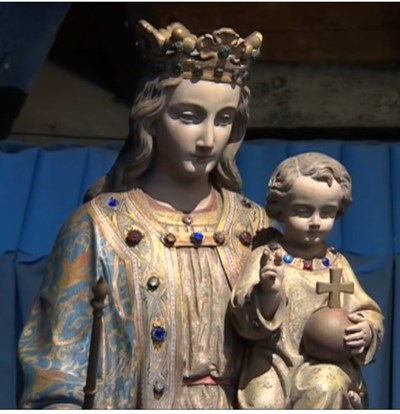 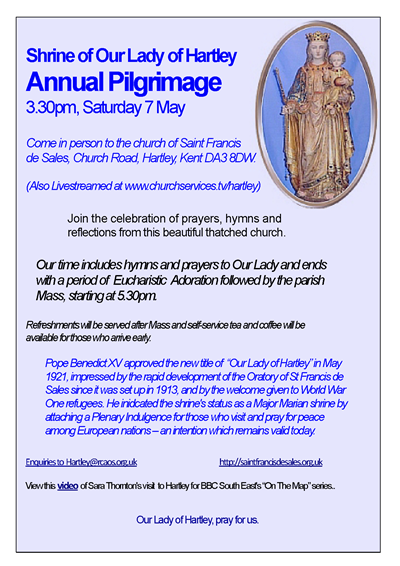 The parish owes its existence to Miss Beatrice Davis-Cooke, who was from an aristocratic London family directly descended from the Plantagenets.  The Church was established in 1913 following her wish to open a Catholic church where none existed, thus answering the needs of Catholics in a rural area.

Beatrice bought one holding that contained a farmhouse and outbuildings including a thatched barn that was around 400 years old.  This was duly adapted to serve as an oratory and or many years clergy visited from London to celebrate Mass. It was later served by the Carmelites for many decades from 1937 onwards.

A shrine to Our Lady was created in order to house a contemporary copy of an ancient carving of Our Lady, the original of which is based in Flanders. Many miracles had been attributed to prayers made at this original statue, and it was not long after the replica had been installed at Hartley that reports began to emerge from parishioners to the effect that their prayers were also being answered.

Miss Davies-Cooke's many society friends included the Italian-born second wife of Lord Cadogan. Lady Cadogan's accounts of developments at Hartley attracted the Pope's attention and he continued to ask for updates as Hartley had become a place of safety for many European refugees during WWI.  Impressed by the successful mission of the St Francis De Sales Oratory, Benedict XV granted the formal title of 'Our Lady of Hartley' to the replica statue, thereby encouraging continued prayer to Our Blessed Lady. He also attached a plenary indulgence which could be gained by visiting the shrine and praying for peace in Europe. Although humble compared to others, it is therefore considered a major Marian Shrine.

On 7th May the service all are welcome to join the pilgrimage to Our Lady of Hartley in person.  The pilgrimage will include hymns and prayers to Our Lady and will end with a period of Eucharistic Adoration followed by the parish Mass, starting at 5.30 pm.  The occasion will also be live-streamed at: www.churchservices.tv.hartley

Refreshments will be served after Mass and self-service tea and coffee will be available for those who arrive early.

BBC Film about Our Lady of Hartley

With thanks to the BBC and Sara Thornton

As 23rd April this year fell within the Easter Octave, the celebrations of St George’s Day have been transferred to the Tuesday of the following week. Continue reading
Next Article

Spiritual Life for Catechists: A Day with Dr Ralph Martin

The Agency for Evangelisation and Catechesis have organised a seminar with Dr Ralph Martin, who is Professor of Theology at Sacred Heart Major Seminary in the Archdiocese of Detroit, USA. He will join the AEC Team on Monday 30 May from 10:30 am-3:30 pm at St Thomas of Canterbury Parish in Sevenoaks, Kent. Continue reading